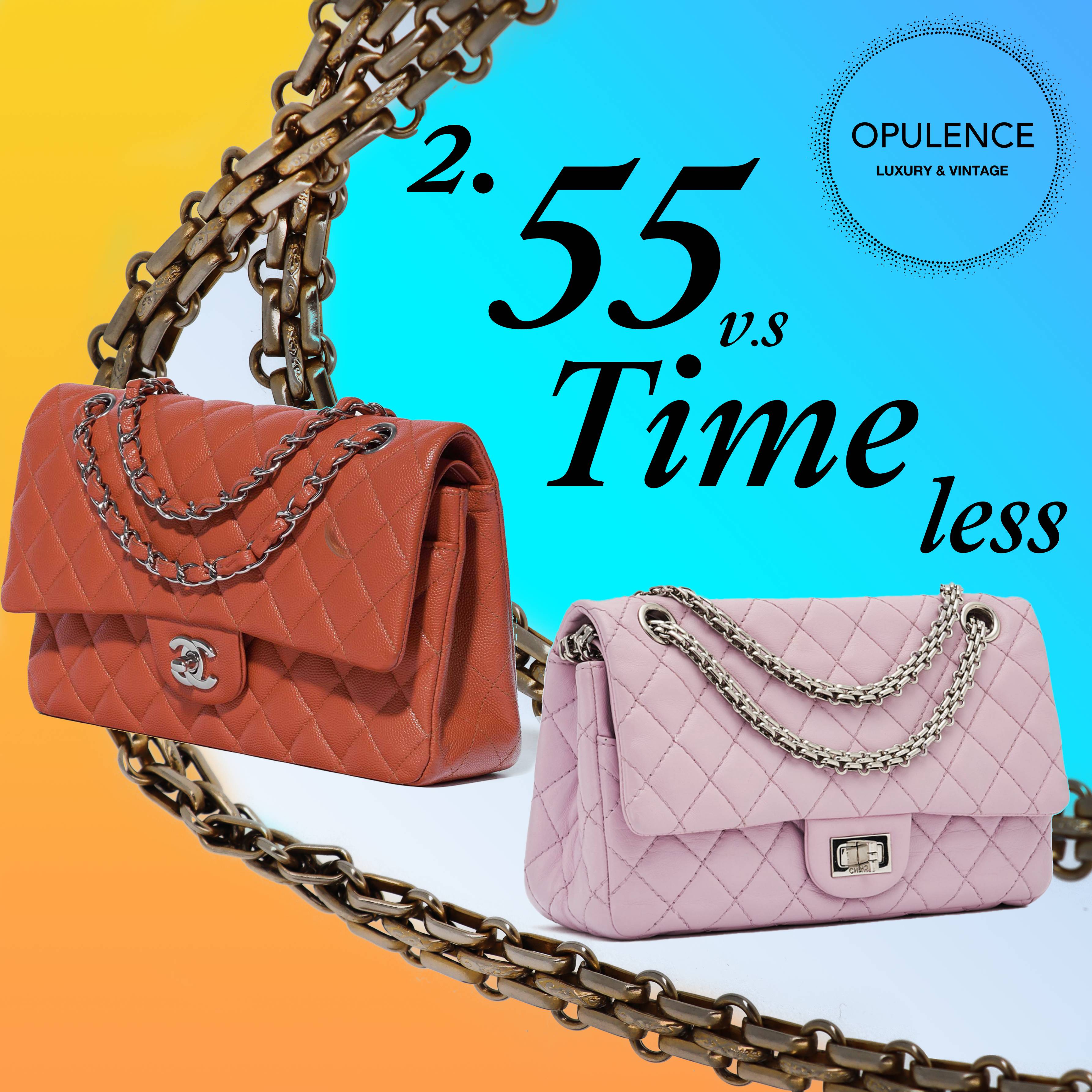 The story of Gabrielle Chanel starts in 1910, when she opens her first store rue Cambon.

After hats and accessories, Coco designed her first twisted locking CC logo in 1925.

Not long after in 1929, designed one of her first bags (only for herself though), and not just a simple bag, it’s the first shoulder bag, the Chanel 2.55 flap bag.

By pleasing her own desire of freedom for female communities, she allowed women to carry their stuff hand-free, hanging on their shoulders. The bag is called Chanel Flap bag at the time.

In 1955, almost ¼ of century after its original creation, Coco now 70 years old, release the bag in its authentic and final form into all Chanel Boutiques, now called the “Chanel 2.55 flap bag”, named after its so called date of creation: February 1955 (2/55).

The Chanel 2.55 has been transforming over the years it’s been on the market, but some iconic details of manufacture that didn’t changed over the years.

The bag, square or rectangle shaped, is originated in diamond quilted lambskin leather, durable and comfy, an inspiration from the stablest boys’ uniform.

The burgundy lining refers to the catholic school uniform and the Aubazine orphanage she lived in.

The back pocket of the 2.55 is rumored to be shaped as the famous Mona Lisa’s cornered smile that Coco loved.

designed for small lover letters. Other lipstick pocket, exterior bill pocket on the back side is, and will always be part of the bag as iconic details. During the war, when material was scarce, she came up with the idea of filling the chain with interwoven leather lace.

The chain of the original 2.55, inspired by men’s military satchels and key holders from her orphanage, it was light, durable, wearable across the chest and on both shoulders.

With a wish of make it looks like jewellery for modern and freed women, it was plated with gold or silver tones. Originally, the 2.55 comes with a double flap. An exterior flap as well as an interior flap compartment is called “Double flap”.

Nonetheless, some models (over the years) only feature the exterior flap, meaning having an open compartment, called “Single flap”.

The Chanel 2.55 can only be a double flap, Chanel decided to discontinue all styles with a single flap in 2014, though you can still find some single flap on the vintage market.

The number 2.55 has nothing to do with the dimensions, instead there’s a three-digit code to nominate the different sizes of the bag. In 2008, the 228 has been out of production.

1983, Karl Lagerfeld becomes the new Artistic Director of all ready-to-wear, haute couture and accessories for Chanel.

One year later, he launches the redesigned CC turnlock closure, thus creating a new version of the 2.55, called the Chanel Classic flap bag, featuring the new logo lock and leaving as iconic the chain-leather woven strap.

The Classic flap and the 2.55 are very similar but their details vary, they’re not the same. Some clear paths are observable; first the chain which is all metal on the 2.55 and leather woven on the modern classic flap; we can also identify the closure difference between the Mademoiselle turnlock for the 2.55 and the CC logo created by K. Lagerfeld for the Classic flap timeless.

Nowadays, the Timeless have been produced in various shapes, many are available on our website.

The size of the Classic flap differs from the 2.55 and Reissue 2.55 slightly:

Today, Chanel only refers to its two most iconic bags, the term “2.55” is used to identify all bags with all chain straps and Mademoiselle lock

In February 2005, to celebrate the 50th anniversary of Chanel 2.55 bag, Karl Lagerfeld re-introduced a bag, as close as possible to the original model, a “Reissue 2.55”, using the Mademoiselle lock once again.

Rare models of that year are on the vintage market, the 2005 commemorative Reissue model was available in three colors (black, grey and white) with silver and gold tone hardware, produced int five sizes:

Both bags are made in various materials, but few leathers are holding the gates of time, the lambskin leather, still the most common used at Chanel, but the Caviar leather too, grained calfskin leather, plus, water resistant.

*Other materials like jersey, tweed, twill, PCV, plastic, resin, and more. In 2018 Chanel announced they’ll stop the use of exotic skins. No other announcements have been released since then about the topic.

The price of the Chanel Classic flap and the Reissue have been inflating over the years, and of course many different models in shapes, materials, and detailed divergent have been released.

Prices can drastically change from one year to another, and counterfeiting have been booming al the while.  That’s why at Opulence Luxury & Vintage, we always check the authenticity to make sure we only selling real Chanel bags.

If you’re looking for your Future Classic flap of 2.55, you’re at the right place you luxury lover! Our collection of bags and accessories from Chanel is always changing.