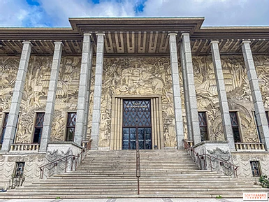 During his career, a tremendous earthquake followed the French designer Christian Louboutin whenever a collection was released, celebrities worn his shoes like jewelries and the world of fashion applauded his creativity and boldness.

As fans of Louboutin’s work, we at Opulence Vintage went to where everything begun. The life of Christian Louboutin is without a doubt a rollercoaster of creativity, sensitivity, sexuality and desire. For his first dedicated exhibition, the red carpet was out big time. We are going to take you to a small tour of what it feels to be inside a designer’s mind. 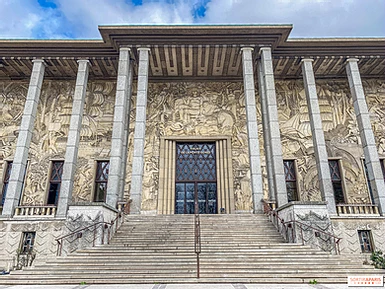 Palais de la Porte DoréeBorn in 1963, in the 12th district of Paris, Christian Louboutin never really left his childhood playground. At the age of 10, in the Museum of Oceanic and African Arts, he was fascinated by a panel forbidding “the wearing of high heels shoes, not to damage or scratch tapestry and tiles” on the floor. From that on, shoe wasn’t an object no more, but a work of art. 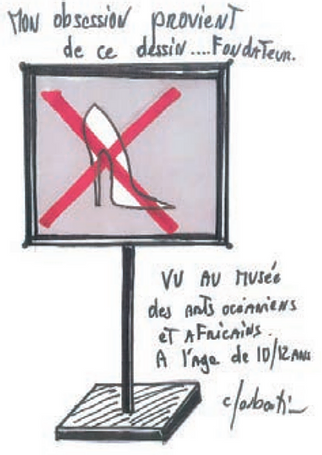 The 13th June 2020, it’s a much older Christian who’s here for the opening of his first exhibition, in the very same museum: The Exhibitionniste.

The structure of the exhibition is circular, going through a square C shaped corridor, and each room follows each other, allowing us to forward and backward as we please. The Scenography of the exhibition is a real architecture fantasy, changing the plot of every room, setting up multiple atmospheres throughout the journey so you can never see or feel same things twice. It’s a beautiful demonstration of what being in someone’s mind could look like.

As we entered the first rooms, you’re getting hit by a display of creativity. A truly beautiful treasure of archives, special orders curated for the occasion and masterpieces are deployed genuinely around an elegant circular journey throughout rooms. With his first shoes made ingeniously with a low-cut budget to his collaboration with R. Vivier and the infamous “Grace”, the room is centered around a selection from the early 2000’s models. They’re accompanied by drawings, sketches, mood boards and portfolios that Louboutin would use to showcase and produce his shoes. 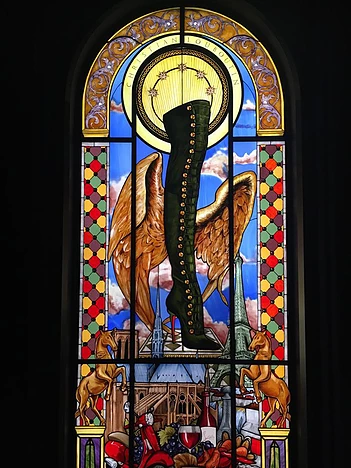 The shoes are displayed around aspects the reveal Louboutin’s eclecticism, through a large range of iconic pieces to almost thirty years continued series of shoe. All of them are tributary to strong artistic references of fashion and culture.

We couldn’t stop staring to a giant synthetic crystal shoe made by the sculptor Stéphane Gérard, sets up on a big and shiny silver Palanquin fashioned by Orfebrería Villarreal in Seville, a Must see.

Further along the way, we experience a feature of the works that made him a creative pioneer. We can find the famous NUDES, launched in 2013 with a great variety of shoe designs, he reached a cultural turning point by embodying and embracing all colors of Humanity, not just beige. Today, we count eight shades of skin colors, lengthening silhouettes of the most beautiful women on the planet.

Patrick Whitaker, Keir Malem and Louboutin himself created sensual and realistic leather sculptures, thus designing a universal, inclusive vision of what fashion should be. 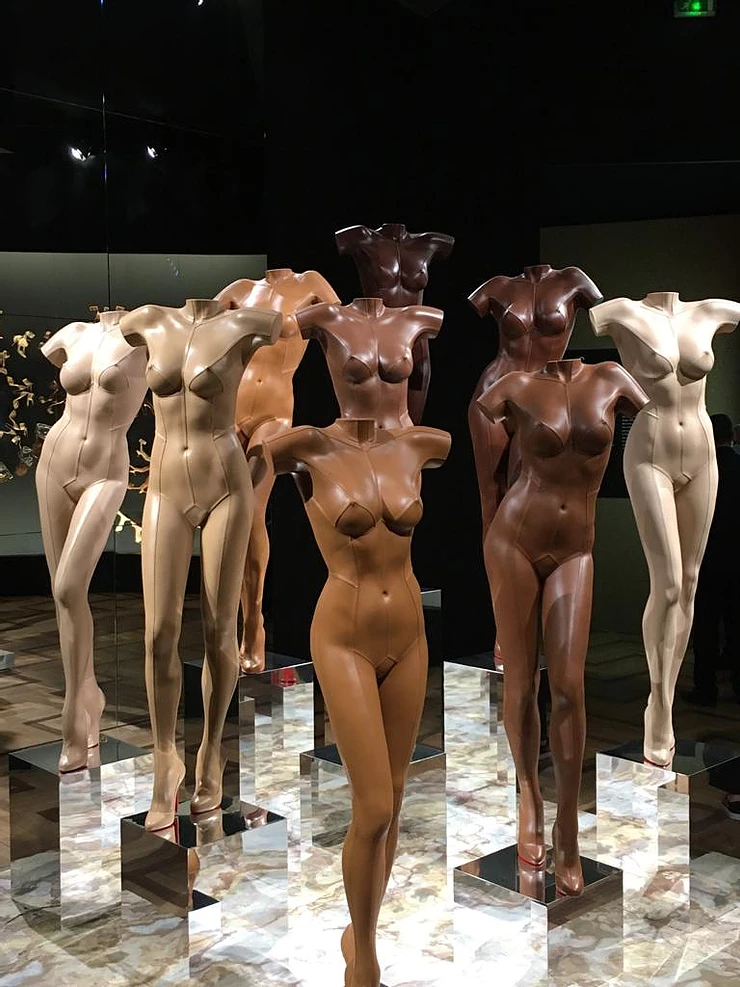 On the other hand, we approach a whole different side of the creator, far from the reachability of the naked leather models, Fetishism.

Few years before NUDES, Christian Louboutin and the filmmaker and photograph David Lynch turned the shoe from and unusable but aesthetic object to an “Object d’Art”.

By delivering a series of groundbreaking photographs, all caring a story both about eroticism and fetishism. Louboutin designed shoe that were impossible to walk with, and Lynch pushed the readability to its zeitgeist. Blurry, sometime smoky and over-lighted, the result is a choreographed beauty, revisiting again the world of photography in a manner he’ll influence the future designer. 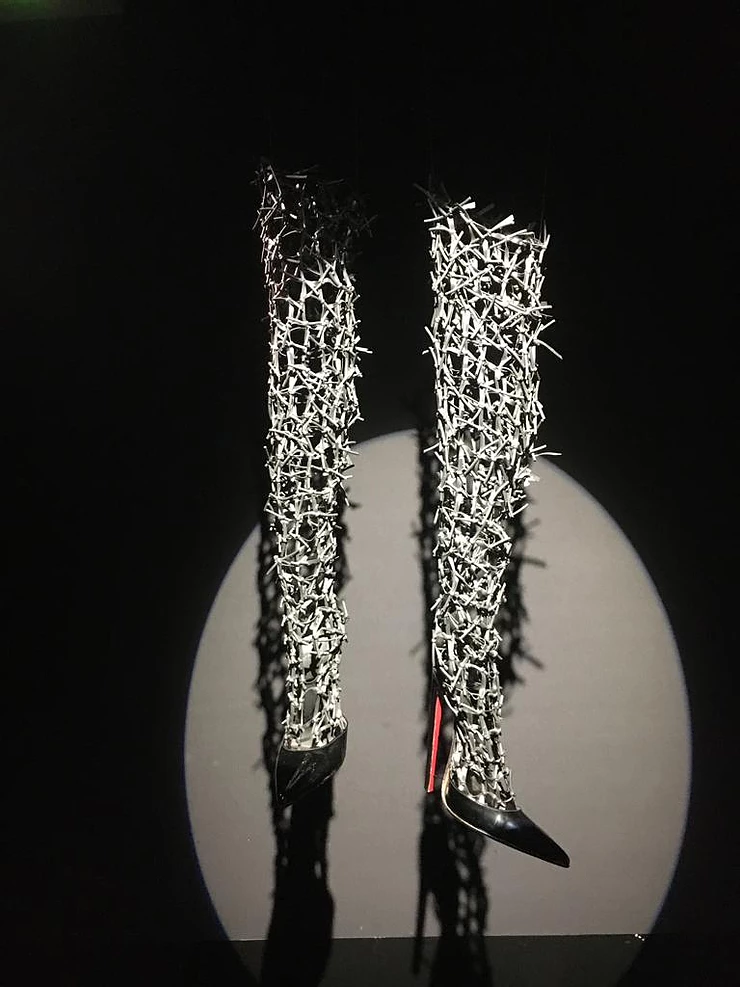 There is such a variety of patterns, designs, stories and inspirations, all pointing the same direction, Christian Louboutin. Illustrating perfectly his vision and his way of working.

The display of precious pieces of fashion history, is by all means, a large tribute to Louboutin’s public work, but it’s not just all about that. The immersive trip you’re getting your head into, is also meeting and discovering the human behind all that work.

We learn by different ways to know the character, sometimes by border strips on walls, exploring the early steps of the teenager, digital workshop where you get a chance to understand how to make Louboutin’s high heels or even through a digital performance in a Bhutanese theater from Diva Von Teese the red sole ambassador, the queen of Burlesque. 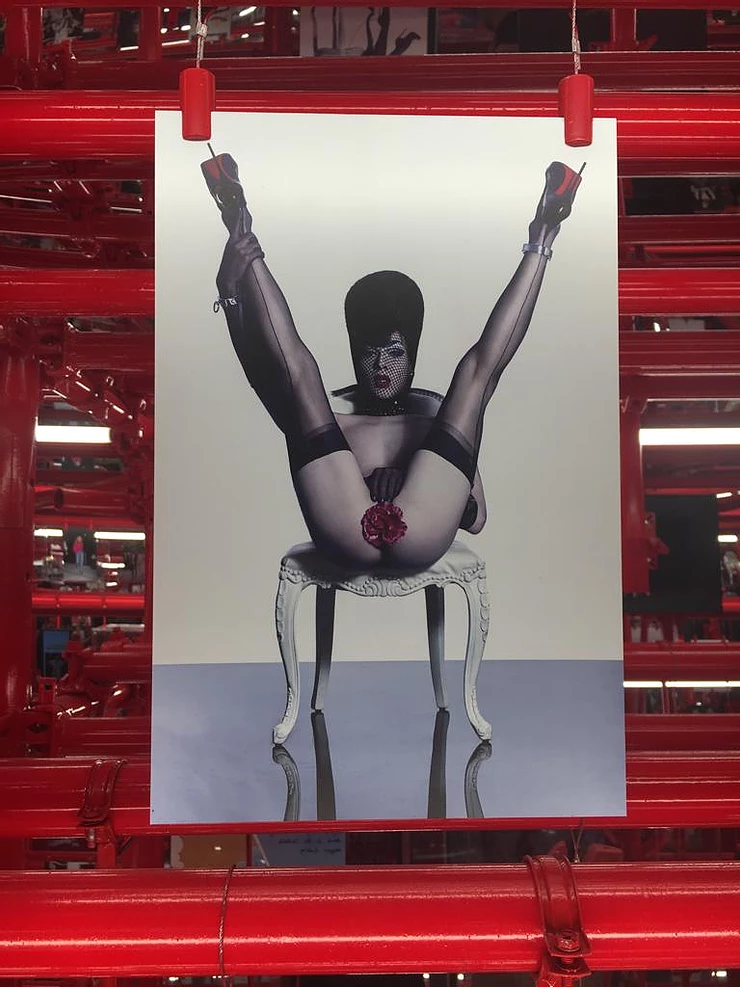 The life of Christian never seems to stop, nicely put in motion by Lisa Reihana, a laureate of the 2017 Venice Biennale, who delicately structured a trippy shifting projections of Louboutin’s dreamworld.

The audience witnessed such a disparity of showcases, all in one exhibition. Enjoy the wonderful demonstration of elegance set up by Olivier Cadet’s team in collaboration with the Palais de la Porte Dorée.

Opulence is digging at this very moment, the most iconic and vintage pairs of Louboutin for and only for you! Check out our daily fresh arrival of beautiful pieces! 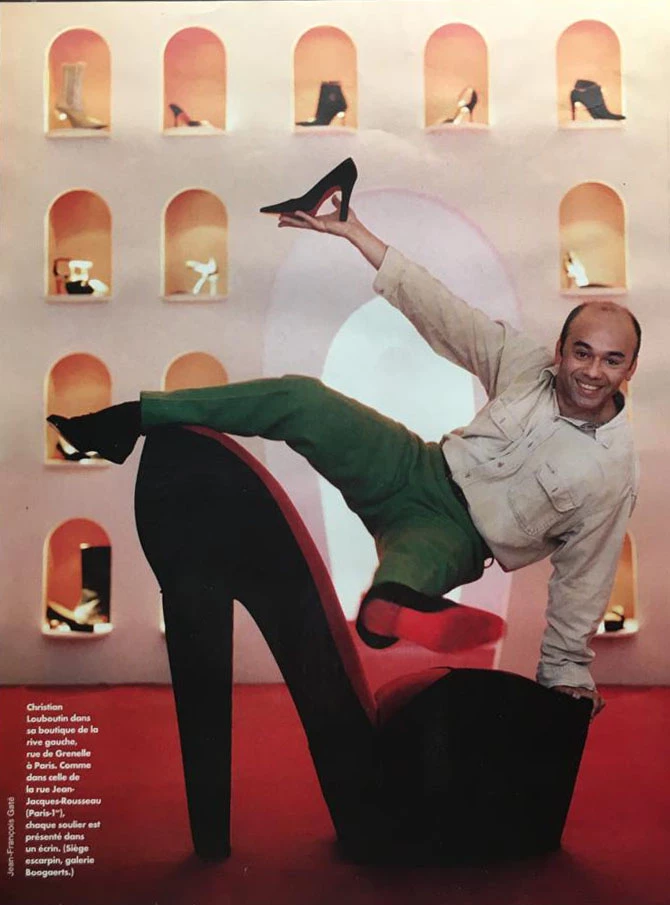